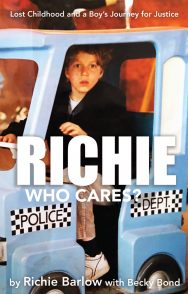 Lost Childhood and a Boy's Journey for Justice

by Richie Barlow – with Becky Bond

Richie Barlow recently celebrated his 40th birthday, a landmark date he never thought he would reach. Many were the times – when struggling to survive a desperate childhood and adolescence – that he clinged to a dream of simply making it to 22.

Abandoned by his abusive mother and stepfather and placed in an inadequate care system, he was sold into child prostitution and criminality while the state apparatus knowingly failed him. But for the love and hope shared by surrogate parents Pauline and Anna, Richie would have become just another tragic statistic.

Yet released back into the world with few coping strategies, he was determined to make his mark and have his mistreatment at the hands of the local authority recognised in order to bring about the change necessary so others would not have to experience the sort of tribulations, tragedy and sorrow he had.

Now in a loving relationship, married to Ben, a new family around him and an award-winning dog walking business, Richie’s story is one of immense determination and inner strength against the longest odds. It is about hope, reclaiming the past and gaining justice. Harrowing yet uplifting, it is a must read.