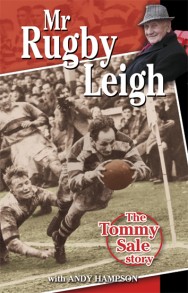 Mr Rugby Leigh is the autobiography of  Tommy Sale, a rugby league hero, who devoted more than 80 years of his life to the sport - as a player, coach, administrator and fan. Beautifully written by Press Association journalist and lifelong Leigh fan Andy Hampson, this is nevertheless a story about much more than rugby. Paperback, 256 pages.

Mr Rugby Leigh is the autobiography of  Tommy Sale, a rugby league hero, who has devoted more than 80 years of his life to the sport - as a player, coach, administrator and fan. Since his initial involvement as a scoreboard operator for his beloved Leigh at the age of 10, Tommy’s enthusiasm for the 13-a-side code has rarely wavered. He broke into Leigh’s first team as a 20-year-old and became their first post-War captain. Away from the playing action, he spent month after back-breaking month overseeing the construction of the club’s former stadium, Hilton Park. And that dedication continued after retirement when, among a string of other roles, he triggered an audacious bid for all-time great Alex Murphy. Tommy Sale has remained at the heart of the Leigh club into his nineties. He still serves diligently as timekeeper and president. Only the Second World War interrupted Tommy’s love affair with rugby league, and his time at Leigh is punctuated only by a brief stint at Warrington and one glorious, career-defining spell at Widnes. Yet this is a story about much more than rugby. It tells of how one man can go from humble beginnings to being a pillar of society. Tommy Sale overcame an abusive father, survived the horrors of war and suffered intense personal tragedy. He has been a shopkeeper, council official, teacher and headmaster. Told with characteristic warmth and modesty, Mr Rugby Leigh celebrates the life of a rugby league legend.