This is the Best Trip 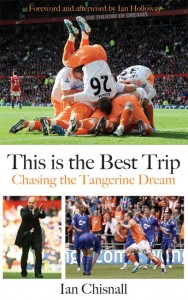 by Ian Chisnall - with a foreword and afterword by Ian Holloway

It took all of a week for the implications of Blackpool’s Wembley success to sink in - so it was in early June 2010 that reality struck.
The club with the smallest resources in Premier League history would be asked to compete with some of the world’s richest and most famous football clubs. That reality became stark when the fixtures were released, listing the first four away games as Arsenal, Newcastle, Chelsea and Liverpool. However you looked at it, the campaign ahead was sure to be unforgettable.

BBC Radio Lancashire sports broadcaster Ian Chisnall was determined that a record of the journey should be made. After hours of documenting the details week by week this, The Best Trip, is his take. From being top of the Premier League until 7.30pm on the opening day, through to the nerve jangling ‘Survival Sunday’ at the end of May, this book chronicles the highs and lows of a truly exceptional campaign. It includes quotes from the broadcastable post-match interviews with inimitable Tangerine’s manager Ian Holloway and many of the clips that could never have made it to the airwaves. There’s the inside track on the transfer window drama and a whole range of emotions as the season sparked and then stumbled. Find out what the gaffer really said to Prince William, who sent the club a letter after enjoying his visit to the match against Wolves. The Best Trip is a unique account of a remarkable season.