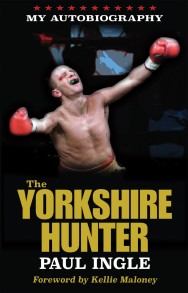 With a foreword by Kellie Maloney

Growing up on one of Scarborough’s toughest estates, Paul Ingle put on his first pair of boxing gloves at the age of seven.

Known by fans, foes and friends as ‘The Yorkshire Hunter’ he fought almost 200 times as an amateur, representing his country in every major international tournament and, in November 1999, beat Manuel Medina for the IBF featherweight world title.

Months later, in front of a packed crowd at Madison Square Garden, Paul came off the canvas and stopped Junior Jones in an eleven-round epic to add the IBO belt.

In December 2000, he fought Mbulelo Botile in what ought to have been a straightforward defence. But then, knocked down in the twelfth, Paul was rushed to hospital where he had emergency surgery to remove a blood clot from his brain.

The Yorkshire Hunter tells the story of an endearing and enduring man who never left his roots. With a foreword by Kellie Maloney, this is the tale of a fighter whose fiercest battle was outside the ring.