The History of Schools’ Rugby League in Leeds 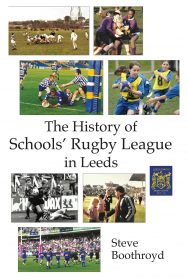 From the early Cup-winning Bramley National and Hunslet Carr teams, through some outstanding Hunslet and Leeds representative sides, to the modern-day national girls’ champions from Corpus Christi, there is a rich and proud history of schools’ rugby league in the city of Leeds.

The History of Schools’ Rugby League in Leeds catalogues the story of the game in words and photographs – reflecting on the changes, highlighting influential teacher-coaches and administrators, and of course focusing on the many schools and teams that have played the sport since the first organised competitions in the early part of the twentieth century.