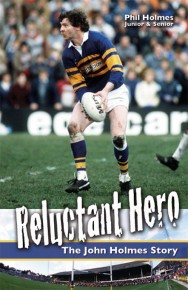 This is the long awaited biography of Great Britain and Leeds rugby league legendary 'quiet man' John Holmes. Uniquely told by his brother and nephew, it is littered with anecdotes and reminiscences from friends and former team mates and is the definitive guide to the life of one of the code’s true greats. Paperback, 288 pages.

The absolute local boy made good, Kirkstall-b orn John Holmes will forever be an icon at his beloved Headingley; his exceptional, distinguished service in a glorious double-testimonial career seeing him become Leeds Rugby League’s longest serving player. Holmes honed his talents on a school playground with his elder brothers, learning and refining his abilities in the ultimate school of hard knocks to become the most durable and, arguably, best ever to don the colours he so cherished. A majestic ball handler, able to unlock any defence, he was a superb cover tackler and, perhaps most importantly, had a supreme rugby intelligence. Not that such influence was planned, his genius was instinctive. In a glorious 21 year career, he won every honour in the game, appearing in 625 matches for the Loiners including 19 finals and was the architect of victory in the majority of them. In 1972 he was integral to the Great Britain side that triumphed in the World Cup. It was a mark of the esteem with which he was held that, at barely a few days notice after his passing at the tragically young age of 57 in late September 2009, over 100 ex-players gathered on the pitch in silent tribute to him. His long awaited story, uniquely told by his brother and nephew, is littered with anecdotes and reminiscences from friends and former team mates and is the definitive guide to the life of one of the code’s true greats.