The Woman Without A Number 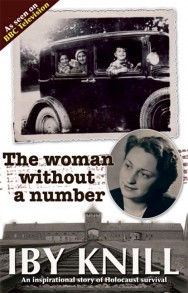 An inspirational tale of Holocaust survival, The Woman Without A Number is the story of Iby Knill, who featured recently on the BBC1 television series My Story. An extraordinarily brave and open book, it tells of persecution, resistance and - ultimately - redemption. Appearing for the first time in print, it is a story that has waited sixty years to be told. Paperback, 288 pages.

This is the story of Iby Knill, whose inspirational and moving account of holocaust survival was featured recently on the BBC television series My Story. In her book, Iby tells of her early childhood in Czechoslovakia and of how her parents - alarmed at the persecution of Jews in Germany - smuggled her over the border to Hungary. The Woman Without A Number also reveals how she was caught by the security police and then imprisoned and tortured, not only as a result of her Jewish connections but for having entered Hungary illegally and for aiding the resistance movement. Eventually, Iby was sent to the infamous Auschwitz-Birkenau camp. In June 1944, Iby Knill left Auschwitz-Birkenau by volunteering to travel as a nurse with a slave labour transport of 500 women. Once transported to Lippstadt, she was put in charge of a hospital unit and risked her life protecting the weak and helpless from the gas chambers. Appearing for the first time in print, The Woman Without A Number is a truly remarkable tale that has waited sixty years to be told.