The Woman With Nine Lives 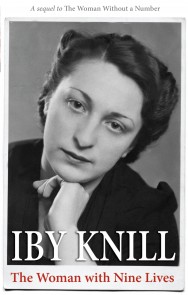 The eagerly-awaited sequel to The Woman Without A Number

Iby Knill is remarkable. An Auschwitz holocaust survivor from Bratislava, she married a British army officer and set out to make a new life in England, arriving in Cornwall in 1947 to set up home.

After struggling to integrate as an immigrant in post-war Britain, she went on to raise a family and carved careers in civil defence, education, textile design and as a linguist, before gaining an MA, aged 80. The loss of her beloved Bert prompted thoughts of writing, but there was a stumbling block: 60 years of suppressed memories.

Now in her 90s, Iby has since overcome several breakdowns but remains determined to share her experiences with future generations. This eagerly-awaited sequel picks up where her best-seller, The Woman Without a Number, left off. It tells the stories of her brother, father and mother – whose indominability she has inherited – and evokes changing times through a life that has embraced challenge and opportunity.

Poignant, moving and searingly honest, The Woman With Nine Lives is confirmation that the past cannot be avoided but, when the very best of human nature is on display, a brighter future can always lie ahead.